First, it’s worth reminding ourselves what 5 per cent GDP growth – let’s call it the “worst case” scenario growth rate – would mean for a country of China’s size. According to the IMF, China’s GDP in 2014 was $10.3 trillion. That means 5 per cent growth in 2015 would add around $520bn to its economy. That’s the equivalent of adding a country the size of Belgium to the global economy in a single year.

The Vaca Muerta (Dead Cow) shale formation in Argentina is around 30,000 square kilometres. It was discovered in 2011.

In 2012, Bloomberg Business appears to be the first source to compare it with Belgium. Since then, many other journalists appear to have copied Bloomberg’s  comparison.

YPF is seeking shale partners to develop Vaca Muerta, an areas the size of Belgium that contains at least 23 billion barrels of oil.

This transcript dates from 2004 and comes from a broadcast on the Australian Broadcasting Corporation.  In fact their constituency is smaller than Belgium, and is closer to the size of Armenia.

Kathleen Hyland went on the Eden Monaro campaign trail with the Liberals’ Gary Nairn and Kel Watt from the ALP.

GARY NAIRN: I’ve probably driven well over half a million kilometres as a member in the eight a half years.

KEL WATT: What I can bring is a passion and understanding, I don’t need a map to get around the electorate.

REPORTER: And in this most marginal of seats, the main contenders know that here more than anywhere, that extra doorknock in Narooma or that extra mile to Moruya could truly count.

GARY NAIRN: Having lived overseas for a few years I realised it was the same size as Belgium which is a comment I’ve often made from before I was elected.

CIFOR (the Centre for International Forestry Research) made a prominent use of Belgium in this infographic.

The UN is using the “size of Belgium” in a report on orangutan conservation and deforestation in Borneo.

“Borneo’s deforestation rate has been among the world’s highest for over two decades and 56 per cent of the protected tropical lowland forests – an area roughly the size of Belgium – was lost between 1985 and 2001.”

I sometimes wonder how much the “size of Belgium” is used in non-English languages.  Here’s a page from a German-Spanish dictionary, about the German phrase “so gross wie” (which means “the size of”).

There is a list of example of the phrase in normal usage, and the very first example is …

Or in English .. “That is an area the size of Belgium and the Netherlands combined.”. 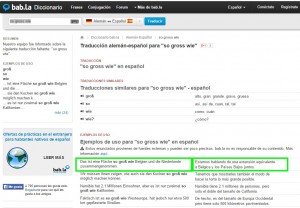 A web site that truly is the size of Belgium